Below find the Facts on WatchTheVote2012, the Saga of Edward True, and why the Iowa State GOP had to change their published winner from Romney to Santorum two weeks after the Presidential Caucus of January 3, 2012 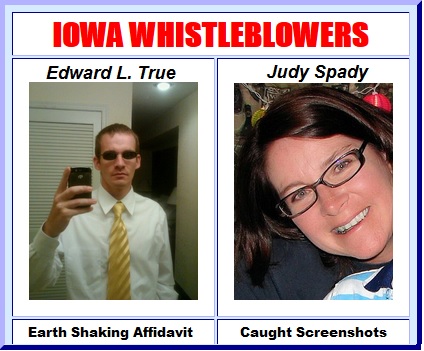 A Week After Edward True and WatchTheVote2012 Teamed up to publish his story and affidavit on January 4th — Newsweek Senior Columnist John Avlon picked up the story in his column at TheDailyBeast.com — and within hours was on Erin Burnett’s CNN show, “Outfront”, with Edward True as Guest also. All this publicity resulted in the announced winner of Iowa Caucus 2012 changing from Romney to Santorum — Showing the POWER of one lone citizen Eye-witness in a transparent Caucus (like Iowa’s). Such an “eye-witness is rendered impossible in South Carolina, Florida, and beyond – due to secret computer “counts.”

CNN Reported at 6:30 AM, Jan 19, 2012:  Santorum now wins Iowa Caucus by 34 votes (kindof ) – as Iowa GOP Election Officials Pretended to be confused — saying that the real count “may never be known.”

Check Here for a link to Our Analysis of the Romney to Santorum switch —
including the REAL VILLAINS BEHIND ENABLING THE IOWA State GOP HQ TO FEIGN CONFUSION at this juncture ABOUT THE 2012 Iowa Caucus Winner!

More Breaking News on News!  So far stories about Edward True’s earth-shaking affidavit have appeared on KCCI TV in Des Moines, Iowa (see at KCCI.com – excellent report) and the Huffington Post. At this minute, the True Affidavit, with its supporting evidence and other witnesses, — changes the winner of the Iowa Caucus 2012 FROM Romney TO Santorum — if no more discrepancies are found.